I have to be honest in admiting that before I visited Pamplona I was naive in my belief that this town could be anything more than the ‘running of the bulls’ festival. I was wrong, very wrong!

We had planned a stop for lunch in Pamplona and to stroll through the city to break our 3 hour journey between Calatyud and Lesaka. Knowing that our visit was so short I hadn’t bothered to look up any information about Pamplona so my only knowledge of Pamplona was the Running of the Bulls or the festival of San Fermin as it is officially known. Now don’t get me wrong, it is a very worthy reason to visit Pamplona as the San Fermín Festival is certainly unique but I discovered there are so many more reasons to visit this beautiful city.

We arrived late in the morning, the weather was grey and the rain fell intimitantly. Unperturbed by the gloominess of the day we ventured out of the underground car park to immediately encounter the Plaza de Toros (the bullring). Our sense of direction was telling us to walk through the streets on the opposite side of the road. By chance we stumbled upon Plaza del Castillo, a square encased by ornate residential buildings dating from the 18th century. The central location of the plaza set the stage for main events including bullfights up until 1844. The bandstand situated in the middle of the square was installed on 28th June 1943. A wonderful place to relax and soak up the beauty of the buildings, it’s not hard to see why the locals fondly call the plaza ‘Pamplona’s living room’.

We continued to wonder through the shiny cobbled laneways, imagining what it would be like to get chased by several bulls. The shop fronts were filled with San Fermín mementos of the usual touristy particulars. The festival is celebrated every year from 6th to 14th July. The running of the bulls actually developed from a need to move the bulls from the countryside on the outskirts of the city to the bullring. The festival only became popular in 1926 due to Ernest Hemingway’s novel The Sun Also Rises, however it dates back as far as 1592. San Fermín, a native bishop during the 3rd century was martyred and allegedly dragged through the streets of Amiens in France by a bull. Prior to the ‘encierro’ or running of the bulls the participants chant a benediction of praise to San Fermín before a rocket is fired signalling the release of the bulls. The runners then traverse along the 875 metre route ahead of the charging bulls over 3 to 4 minutes hoping not to get gored. Surprisingly there have only been 15 deaths since 1910, although many participants are badly injured. Personally I would not want to witness this spectacle and fortunately for us we were in Pamplona in early June and not July!

It’s also worth knowing that Pamplona is the first major city on the Camino de Santiago (the Camino Frances), a pilgrimage walk also known as ‘The Way’ that starts in St Jean Pied de Port in France and ends at Santiago de Compostela in Spain. This route follows the streets of La Curia, Mercaderes, San Saturnino and Calle Mayor before leading up to the medieval walls of the city.

Along this route we were able to observe the Cathedral, a Neoclassical Roman Catholic Church designed by Ventura Rodríguez in 1783. On such a grey day the cathedral appeared to glow displaying the intricate stonework of the cloisters. We admired the Cathedral from the outside due to our time constraint. Had we had more time I would have joined one of the tours that include a visit inside the cathedral, the cloisters and a small museum. Apparently the 11.15am tour visits the bell tower where you can see the 2nd largest bell in Spain. 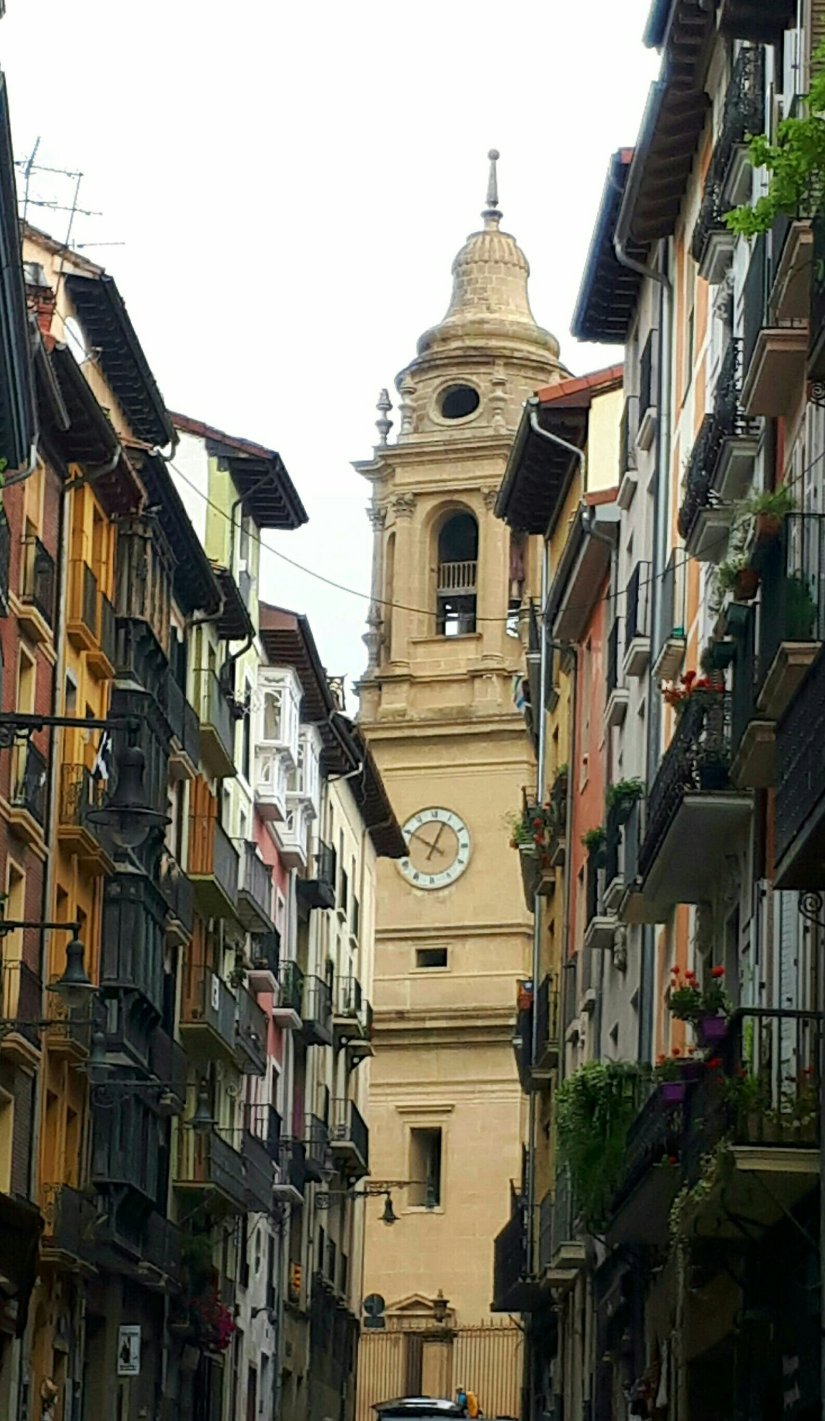 Continuing on our exploration we emerged at The Citadel and Vuelta del Castillo Park. The Citadel was built by the order of Phillip II of Spain in 1571 to align with the murallas (walls). It is now considered by many to be one of the finest examples of military architecture in the Spanish Renaissance style. The walls stretch for 5km around the Casco Viejo (old town) and are considered to be among the best preserved walls in Europe. When the military function of the Citadel was no longer required it was turned into Vuelta del Castillo park, the largest green space in the city. It is possible to walk around the walls between Media Luna and Taconera Park to admire the impressive stonework and soak up the soothing green colours in the background.

After a leisurely lunch in a traditional Spanish bar it was time to make our way back to our car and finish our journey to Lesaka. I have to admit we were a little lost so I couldn’t say which route we took back to the Plaza de Toros. Along the way we accidentally stumbled across the Monument to the Fueros located at the eastern end of Paseo de Sarasate parade. Fueros de Navarre were the laws of the Kingdom of Navarre from the Middle Ages up until 1841. The monument is made of bronze, marble and different types of stone, it was constructed in 1903 and is 23.4 meters high. Even on a gloomy day the monument was awe inspiring and simply looked majestic.

It really is amazing what you can discover in a matter of a few hours when visiting such a great city. Our final surprise was a gigantic red back inflatable spider crawling down the Teatro Gayarre.

Considering we only had a few hours in less than desirable weather, it was enough to fall in love with Pamplona. It had culture, history, great food and a relaxed atmosphere for a city of its size. I will definitely return and spend more time delving deeper into the character of Pamplona, it just won’t be in the second week of July!