It had been nine years since we visited France as a family, a considerable time since it is one of my all time favourite countries. I love everything about France, the culture, scenery, language and most definitely the food and wine. We were travelling from Spain where the journey took us over the Pyrenees offering breathtaking snow capped mountain views at every turn.

Our destination was the town Quillan situated in the Languedoc-Roussillon area, also known as ‘Cathar Country’. Quillan geographically sits in the foothills of the Pyrenees beside the River Aude. The town dates back to 781 and boasts a military castle (Châteaux de Quillan) built in 13th century.

We based ourselves at Erminy House located in the centre of town. We used Booking.com to book the accommodation and it was perfect for us as we were travelling with my Dad and our two children. The house consisted of a living room, dining room and kitchen on the ground floor, two bedrooms and a bathroom on the 1st floor and finally an en-suite bedroom on the 2nd floor. The rooms were tastefully decorated and the bathrooms were very clean. Upon arrival, Barbara the host gave us a tour of the house, she also supplied milk, butter, eggs, tea and coffee as well as a bottle of wine. It is worth noting that if you arrive by car it is not possible to park right outside the house. Barbara was very helpful and suggested a few places to park that were within 100 metres of the property. It is a great place to stay if you want to be within walking distance to everything in the town.

Quillan is a decent sized town with several restaurants, bars, supermarkets, chemists and boulangeries. There were two places in Quillan that stood out for our family. The first was the bakery Au Coin Des Gourmets (try the croissants from this bakery, you will not be disappointed) and the second was Café Brasserie La Palace, the perfect place to enjoy a beer with a view of the river and castle.

Rennes-le-Château is a small hilltop village well known not only for it’s quaint beauty but for it’s renowned mystery and conspiracy theories centred around a Catholic priest named Francois-Bérenger Saunière.

I would recommend reading a few articles or watching a documentary about the controversial history of Rennes-le-Château to really understand the enormity of this place.

In short it is believed that Bérenger Saunière discovered buried treasure in the 19th century, a conspiracy theory that has never been proven. Between 1886 and his death in 1917, Father Saunière not only completely renovated the village church of St Mary Magdalene and its presbytery, but he purchased land directly adjacent and built a smart new villa and Gothic Revival tower. He also created a panoramic terrace and planted out formal gardens. It has never been discovered how Saunière came across large sums of money – amounts so large that it is inconceivable that a small village priest could gain such wealth.

The church is free to visit, however, there is an entrance fee to visit the Presbytery where Saunière resided, the Villa Bethania, the Magdala Tower and the gardens. We opted to pay to have an audio guide (you are given an iPad with preloaded videos) to make it easier to understand for our children. There are also information boards in English throughout the complex. We took our time and spent around 3 hours visiting all the key sites.

The Presbytery is where Bérenger Saunière lived whilst he was the Catholic Priest at Rennes-le-Château. It is a well presented museum that explains the life of Saunière and the possible theories of how the wealth was accumulated. The most popular idea is that Saunière discovered a secret document relating to the Catholic Church inside the altar pillar, although this has never been substantiated.

After we had absorbed all the information in the Museum we meandered through the formal gardens. We enjoyed sitting in the garden to reflect on the amount of money it would have required to build such extravagant dwellings. From the gardens it is possible to visit Saunière’s tomb and resting place and the Magdala Tower.

Personally the Magdala Tower was my favourite part of the visit to Rennes-le-Château. It is the iconic image that is shrouded in mystery. The Tower not only looks impressive with it’s turrets but the view from the top is breathtaking. You really have to visit and experience Rennes-le-Château to understand the enigma and curious nature it conveys. 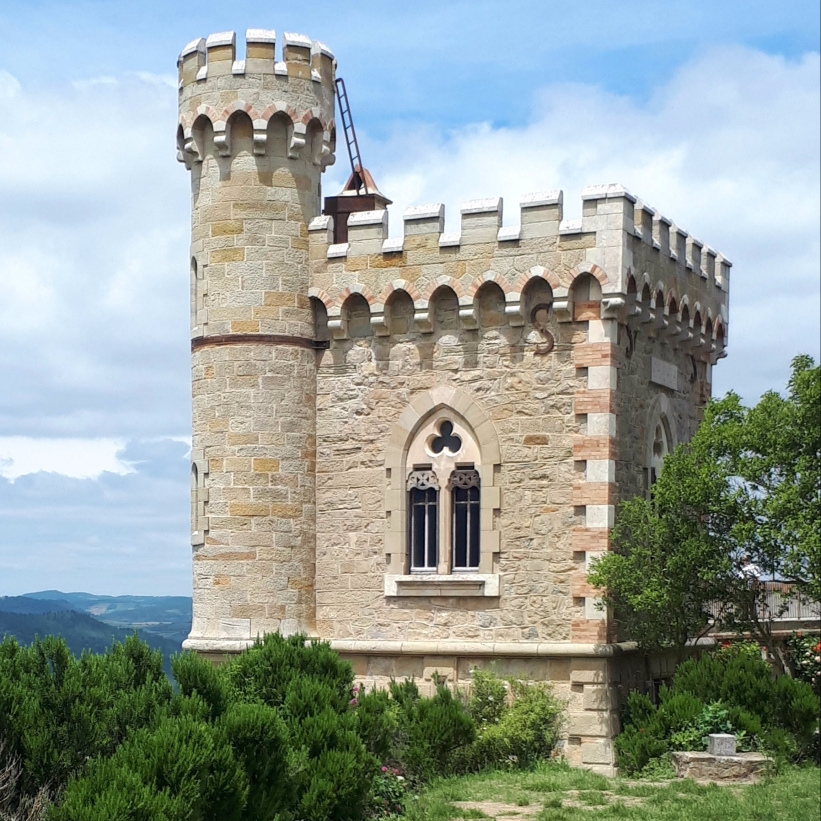 Top of the Tower

Floor tiles inside the Tower 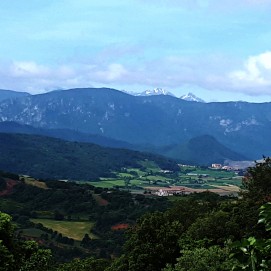 The church is a place you must visit even if you are not a believer in Catholicism. It is small inside but that does not detract from the ornate stain glass windows and religious sculptures. Just as you’d expect from a quimsical place you are welcomed into the church with a Latin inscription along with a statue of the devil that is now headless due to vandalism.

Rennes-les-Bains was developed in Roman times when local thermal waters were discovered. Unusual geological characteristics of the rock have made the water salty, hence it’s name River ‘Sals’ (french for salt).

Although we didn’t get a chance to soak in the hot spring waters we did enjoy a leisurely walk along the river. The village is very picturesque and serene so it doesn’t take long to feel fully relaxed. Along the walk we discovered an ornate tree carving near the river. It was also the perfect place to stop for a refreshing beverage. 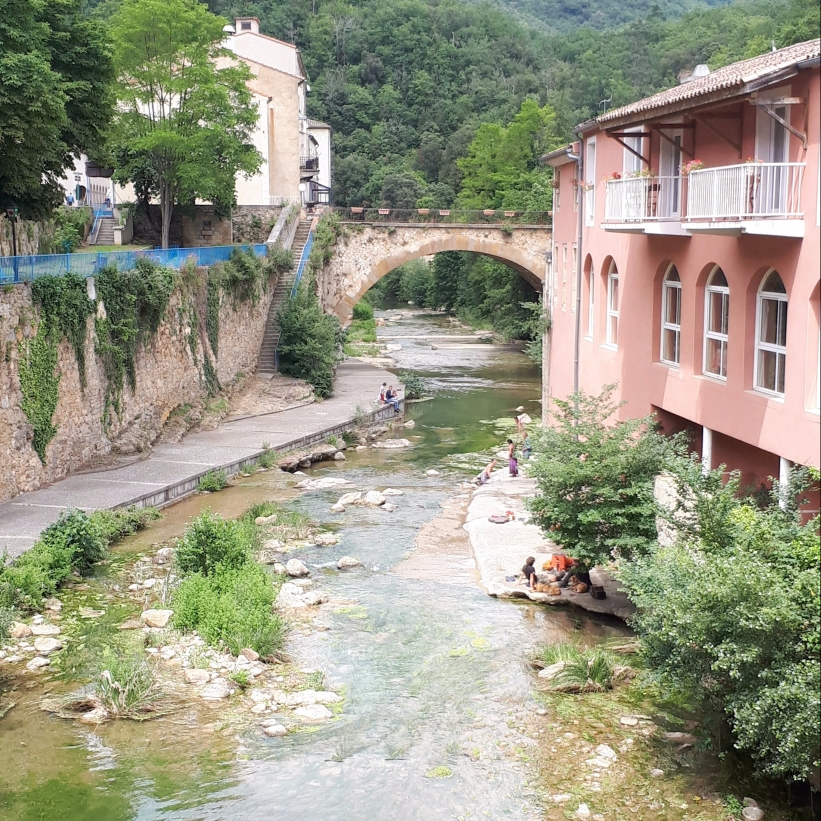 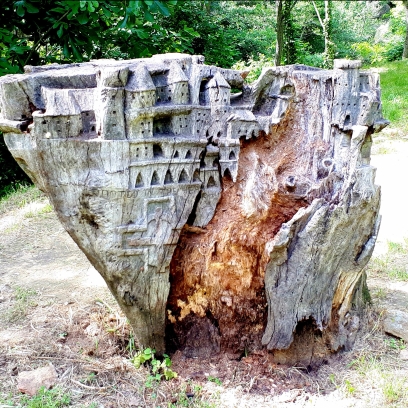 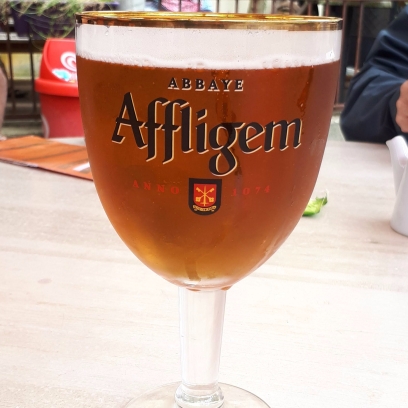 Arguably if there is only one attraction you can fit in whilst in this area then it has to be a visit to the medieval city of Carcassonne. It is one of the architectural marvels of Europe. I was lucky enough to visit when I was around 10 years of age so I couldn’t wait to experience the fortress as an adult. 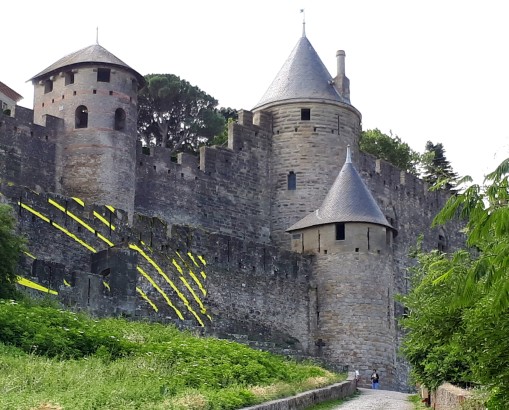 The medieval walled city is nestled in the picturesque valley of the River Aude between the Pyrenees and the Massif Central. It took us around 45 minutes to travel by car from Quillan. At the time of our visit the entrance fee was €8.50 for an adult and under 18’s were free. Opening times were 10am – 6pm.

The Romans fortified the hilltop site in the 1st century BC and the towers that were built in the 6th century by the Visigoths are still intact. The viscounts of Carcassonne then added to the fortifications in the 12th century. A stronghold of the Albigenses, the fortress was taken by Simon de Montfort in 1209. The outer ramparts of the fortress were constructed during St. Louis IX’s reign, and the work was continued, with intricate defence devices, under Philip III. It was so well protected that Edward the Black Prince was stopped at its walls in 1355. However, its benefit as a defence ended in 1659, when the Province of Roussillon became incorporated with France. Sadly the ramparts were gradually abandoned and the fortification fell into disrepair. Fortunately they were restored by Viollet-le-Duc in the 19th century.

Once inside the fortified city you can walk atop 3km of walls and pass 52 towers and barbicans along the way. Inside the walls you can visit the Cathedral ‘Basilique Saint Nazaire’. We had the added reward of hearing a group of singers perform, it was so good I almost cried. 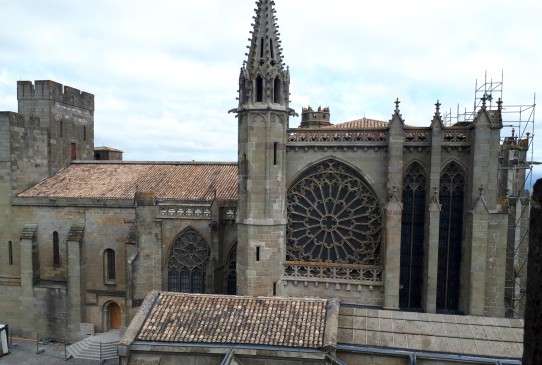 There is also a museum with interpretations of the history of Carcassonne and it displays many artefacts. It is possible to stroll through the medieval cobbled streets and peruse the shops without paying the entrance fee. There are also numerous bars and restaurants to experience.

We chose to spend a whole day at Carcassonne, this gave us the opportunity to eat traditional food at one of the many amazing restaurants inside the city. It was a real treat to experience this phenomenal place of historic interest again.

On our journey back to Quillan we decided to stop at Alet-les-Bains, another village known for it’s spring water. Not far from the centre of the village stands the remains of an ancient Benedictine monastery which was built in the 9th century from ochre sandstone. It’s incredible to find such history in even the smallest of villages.

Château de Puilaurens is a 20 minute drive south east of Quillan along a scenic road framed by rocky outcrops.

The Cathar Castle is located above the Boulzane Valley and looks down on the villages of Lapradelle and Puilaurens.

It is a beautiful drive up to the car park from the village. Just beyond the car park is the ticket office where we paid an entrance fee of €6 per adult. We then walked for 15 to 20 minutes up the fairly steep stony path and then we zigzagged our way to the entrance of the castle.

This castle is very different from many of the other Cathar Castles in the region due to the fact that much of it are in ruins. Do not be put of by this as I felt it gave the castle a very special atmosphere were your imagination could run wild. A brochure is provided with information about each section so it is easier to understand how it would have looked in years gone by. The real gem to visiting this place are the outstanding views from the top. It is worth noting that some parts of the castle have very steep drop offs and whilst signage does warn you if like us you have adventurous children it’s best to stay with them at all times.

Whilst sitting at the top contemplate how such a structure was built so high up and so close to the cliff edges. It really is well worth a visit.

I wish we could have stayed longer in France and really soaked up the culture. It was time for us to head back to Spain and explore a new place, our next destination was Monistrol de Montserrat in Catalonia.

I hope you get to enjoy this special region as much as we did. Thank you for reading my article. Keep a look out for my next article on Monistrol de Monserrat.